Light Therapy
Pain  •  Anti-Aging  •  Skin Care
East meets West, old meets new. We are always looking for the most advanced treatment options, and the latest scientific and technological advances to incorporate with Traditional Chinese Medicine in our clinic.

We are now offering LED Light Therapy (Celluma) as a stand-alone treatment, or add-on to acupuncture, for pain and skin conditions.
​
Each of the two therapies have their well-known and proven healing benefits. They also strongly complement each other. Combined together, they accelerate the healing processes for many pain conditions, and greatly benefit skin conditions - from inflammation to rejuvenation.
What is Celluma?
Celluma is unique and quite unlike any other low-level light therapy device (LLLT) available today. Based on the NASA research, Celluma delivers blue, red and near-infrared light energy simultaneously, to safely treat a wide variety of conditions.
Each wavelength is absorbed by different molecules that act as a signaling mechanism for different cellular processes.
​It has been successfully used to:
- Increase circulation
- Accelerate tissue repair
- Decrease wrinkles
- Decrease inflammation
- Improve skin tone, texture, and clarity
- Ease muscle and joint pain, stiffness, spasm
- Reduce arthritis pain
- Kill the bacteria that causes acne
REQUEST APPOINTMENT
What is Light Therapy?

Many ancient cultures practiced various forms of light therapy, from worshipping the Sun as a deity that brings health (i.e., they were aware of the health benefits of light), to 1000+ years old Chinese and Indian medical scripts about combining the herbs and sun exposure to treat certain ailments.
More recently, therapeutic effects of red light on wound healing were incidentally discovered in the late 1960s by a Hungarian physician Dr. Endre Mester, while he was researching the use of laser in surgery and medicine. The evidence that low power light modulates pain dates back to the early 1970s, when Dr. Friedrich Plog (Germany) first reported pain relief in patients treated with it. His main work was creating the apparatus for laser therapy primarily used for acupuncture (AkupLaser System Plog), replacing the needle with the light beam (1975). Dr. Plog received numerous academic awards for his work in Europe, Asia, Canada and United Nations. Light Therapy has been used in those countries ever since by many clinicians but was still not accepted by the mainstream medico-scientific world in the USA until 2002, when FDA first approved laser diode phototherapy.
In 1998, Prof Harry Whelan and his group at the NASA Space Medicine Laboratory developed ‘NASA LED’ – a new generation of LEDs that can achieve useful bioreactions through cellular photoactivation without heat or damage (which are a common danger of laser). US photobiologist Kendric C. Smith renamed the previously used term ‘low level laser therapy’ (LLLT) to ‘low level light therapy’, to include LED energy.
“Phototherapy is Becoming Mainstream:
The increasing number of papers on LLLT in the Photobiomodulation sessions presented at the 2010 and especially the 2011 meetings of the American Society for Lasers in Medicine and Surgery (ASLMS) bear witness to the fact that LLLT is no longer quite the bête noir it used to be in the USA, although there is still too much skepticism, and it has achieved a reliable status worldwide. LED phototherapy has now been well-proven to work and is reported to be effective in a large variety of clinical indications such as pain attenuation, wound healing, skin rejuvenation, some viral diseases, allergic rhinitis, other allergy-related conditions and so on.” (https://www.ncbi.nlm.nih.gov/pmc/articles/PMC3799034/)
How does Light Therapy work?

Specific wavelengths of light energy, when properly absorbed by tissues, up-regulate compromised cells. Light energy, or photons, is absorbed by photoacceptors in the mitochondria and used to create adenosine triphosphate (ATP).
The produced ATP then stimulates various metabolic processes which can result in the repair and regeneration of cell and tissue components. 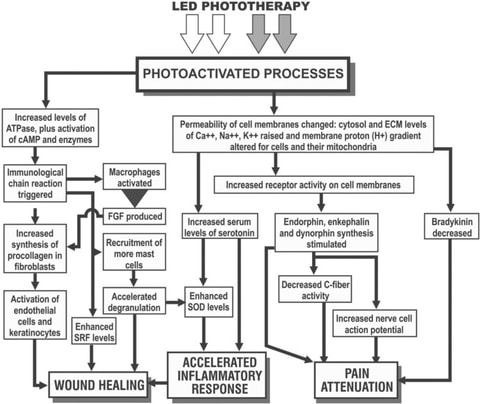 ​Is LED dangerous to humans?

​Radio waves, infrared radiation, visible light, ultraviolet rays, x-rays, gamma rays are all photons, that is, light, but of different regions of the electromagnetic spectrum. That means that they differ in wavelengths, energy, and vibration frequency. Consequently, they have different effects on the live tissue - some are damaging, and others are beneficial.

The evidence shows that blue, red and near infrared (NIR) light have therapeutic benefits. Therefore, most of the equipment being sold today have either blue, red, NIR, or a combination of those.
How does LED compare to laser?

LEDs emit incoherent light in a broader range of wavelengths. Lasers emit coherent light with the same wavelength and direction. That enables them to have more powerful effects on matter, which can potentially be very dangerous. LED's power output is significantly lower, they are less invasive and less potentially harmful.
​However, they still have the same end effect on ATP production and healing as lasers.
Both, laser and LED therapy are efficient, and have their use in specific areas of clinical practice.
You can request a FREE 15 min in-person consultation.
​This is to give you an opportunity to get familiar and comfortable with our treatment program. ​​
REQUEST APPOINTMENT